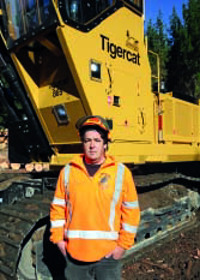 It was only a matter of time before Tigercat  decided to fill one of the glaring gaps in its line-up; a compact, purpose-built log loader.

That time has now come with the introduction to New Zealand of the all-new Tigercat 865, which sits under the brand’s mid-size 875.

The 865 gives Tigercat an entry into the highly competitive 30-tonne loader market, where just about every manufacturer has a stake.

Loaders in this segment are the meat-and-potatoes of a harvesting crew’s machinery fleet. They undertake the day-to-day fleeting and loading duties, constantly on the go, so they’re a vital cog in the system.

They can range from cost-conscious converted excavators to all-out dedicated forest machines built from the ground-up. The Tigercat 865 is positioned at the top of the latter category and it’s priced accordingly.

And that suits Ron Thomassen, the owner of the 865 we’ve come to test, just fine. He’s happy to pay a premium because experience has shown that he’ll likely get many years of faithful, productive service from the Tigercat. He’s owned plenty of the Canadian forestry company’s machines over the years (his fleet currently has more than 20 working across his nine central North Island crews), so he should know.

Ron’s machine is the second Tigercat 865 to arrive in New Zealand, following the launch in Canada. The first, which is sporting a Duxson GX171 grapple, is working for Whisker Logging in the lower North Island.

Strictly speaking, the new Tigercat 865 is bigger than your average 30-tonne loader because it weighs in at 32.4 tonnes, minus the grapple. That puts it slightly above Caterpillar’s entry level forestry loader, the Cat 538, which tips the scales at 31.6 tonnes and also the John Deere 2156G, which weighs in at 30.7 tonnes.

Those two machines are obvious direct competitors for the new Tigercat 865 as they are purpose-built for the forest, sporting a tall rear-entry cab (optional on the John Deere) and have similar specifications, although they don’t quite match the power output of the newcomer.

It was the power output and the way in which the grunt is delivered to boom/arm, implement, slew and track motors, in addition to the size of the machine, that persuaded Ron to dip deeper into his pockets for the 865.

“We’ve been running Sumitomo 240s and 300s and they’ve been good for us – we’re getting another 300 built up right now – but with the Tigercat 865 we’ve got a bigger and faster machine than what we normally use and it has more reach,” says Ron.

There were other things that ticked the boxes: “Yeah, the big cab, it’s nice and high with lots of vision. It’s very user-friendly when you get up there. And you climb up through a safe rear-entry door and that’s pretty important these days for operator safety and well-being.

“For the mechanics, it’s real easy for them to access through the fold-down sides and platforms to stand on. That little door through (the counterweight) to the rear is a good idea.” 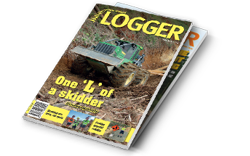