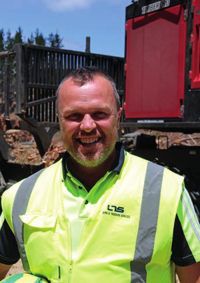 LOADING UP THE NEW TIMBERPRO TF840D forwarder reminded of when I used to drive logging trucks for a living.

Being able to stack 30 tonnes in the bunk is similar to a truck load and there’s a lot of satisfaction in bringing back such a huge amount to the skid site, having made a decent dent in the stock laying on the ground out at the cut-over.

But that’s where any similarities with a truck end. In all other respects, the TimberPro actually felt more like an excavator, with a swivelling cab that has the steering and all controls working off the levers at the ends of the armrests. Even the boom is placed exactly where you’d find it in an excavator, spinning 360-degrees with the cab when loading or unloading.

Climbing up into the cab had a similar feel to an excavator. You’d normally have steps that swing down to help the operator climb up on a forwarder, but Willie wanted the blade, which replaces the ladder on the option list, so the climb up and down is a bit more difficult.

Once up in the cab, it’s very cosy and excavator-like. No need for the extra space to accommodate two driving positions because you just rotate the cab to face the direction you are heading.

And you don’t have to worry about the steering controls being reversed when you drive backwards because there’s a switch to make it steer the right way.

The upgrade to the electronics in this new model means the operator can customise the controls to make them as fast or slow as you like. Cale has them dialled up to 80% and they were a little ‘touchy’ at first, but I wanted to see how they worked on his settings and it didn’t take long for me to get used to them. The controls are laid out just like an excavator. On the left are slew, dipper arm and a thumb control for extending the jib, as well as that nifty reverse steering button. The park brake’s on that side, too, plus manual revs up and down, with an auto rev just like on a loader that drops down when not using it. On the right is open and close for the grapple, forward and back for the boom, and on your thumb control there is a rotate left and right, which is the way I like it. The steering toggle is also on this side.

Of the two foot pedals, the right one governs forwards and backwards – press it on the right side and it goes forward and then move your foot to press that pedal on the left for reverse. Take your foot off and it stops. No real need to use the brake pedal.

The TimberPro doesn’t have the top speed of other forwarders, but you rarely get to test the limit unless the ground is super-smooth. It was fast enough on...